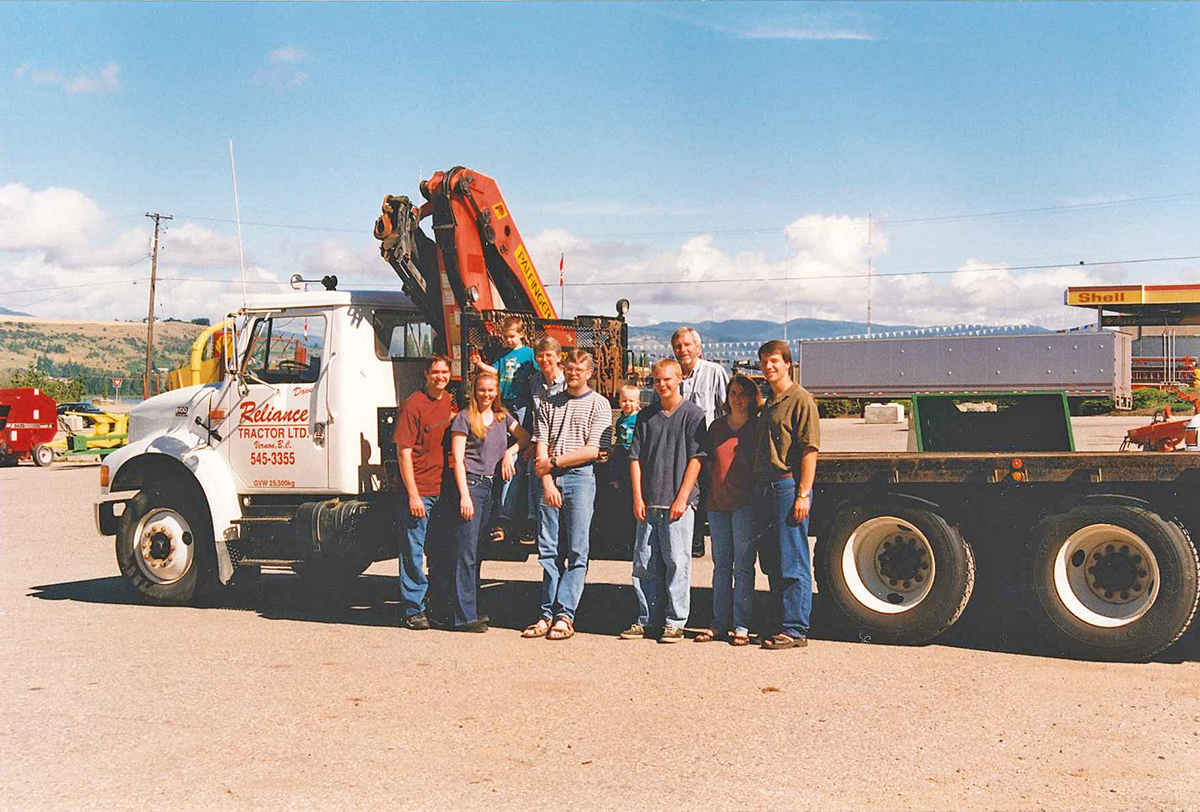 In 2001, after co-owning Reliance Tractor (now Avenue Machinery) and using it as a way to impact the lives of his staff and their families and give profits to international needs, Ben Hoogendoorn sold his share. He and his family celebrated this change of address with some family photos.

When you talk to Ben Hoogendoorn, the first feeling you get is warmth. Here is a man who has overcome massive obstacles, had wide-reaching social impact, built a successful business in spite of major set-backs, and yet, is one of the most humble people you will ever meet.

Rooted in a Dutch dairy farming community in rural BC, Ben is no stranger to hard work. Honest living, care for neighbours, and faithfulness to God and family are some of the values that simply run in his blood. So when, as a young 27-year-old, he joined five partners to buy into a farming equipment dealership in the Okanagan, it’s no surprise that he was all in—come what may. And come it did.

For nearly a decade, they ran the business as a successful partnership. Then the economic recession of the 1980s hit and the business began to fail. Financial “tensions and pressures” started to put chinks in the armour of their collective long-term vision. It became clear that the other partners had wanted to make their fortune in 10 years and move on. Ben, on the other hand, saw their business as a life-time commitment. His heart was in it. And so was his money. As the other partners made their exits, Ben bought them out, even though the company was effectively bankrupt. “I felt in my heart it was my duty to carry on with it,” Ben explains. 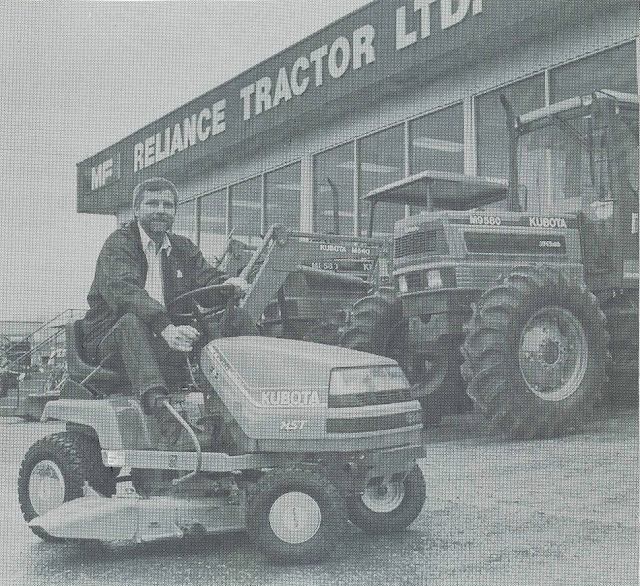 Ben takes a lawn tractor for a test drive outside his farm equipment dealership and shop in Vernon, BC.

This rough patch in the business became a sort of crucible of reconciliation. During that time, one particular partner made a few poor and very costly business decisions and was asked to leave. It was a bitter parting. But Ben personally pursued him to work through their differences and repair their friendship. Things didn't go so well with another partner who walked away with ill feelings and refused to explain why. For decades, Ben continued to reach out to him, but with no success. “While we have life,” Ben explains, “it’s still our responsibility to try and reconcile.”

For Ben, his business was not something he did on the side to support his family. It was his life, his faith, his ministry—for him and his wife, Wille. “I can’t begin to tell how much my wife Willie sacrificed to get us through these challenging times. Without her support and faith, the story would have ended so differently. Through God’s grace, we were able to survive and turn the company into a profitable enterprise. That was also kind of a ministry because we had people [working for us] that other companies probably wouldn’t have hired because of the issues that they had.”

Ben’s open heart toward others in need grew out of his experience being raised in a vibrant, missions-focused Christian Reformed Church. As a young boy of just 11, he heard God’s call on his life. Not unlike Samuel, Ben woke one night to hear an audible voice say “I want you to be with me.” While he did not fully grasp what it meant, he knew in his heart it was God’s voice.

As an adult, Ben continued to respond to God’s call through his business. He ministered in visible and invisible kindnesses, in integrity, in spoken and unspoken testimonies. And through his faithfulness, he changed lives in the Okanagan and beyond. Together, Ben and Willie supported cross-cultural missions and poverty alleviation through World Renew, the CRC’s mission organization. He met missionaries and eagerly listened to their transformational stories, his heart always burning with passion for what God was doing in the world.

In 1994, that passion became more focused. Through a life-changing experience in Cambodia as a chaperone on his teen daughter’s mission trip, Ben heard God’s audible voice for the second time in his life. Standing on the edge of the Mekong river, surrounded by material poverty, he heard God say, “You will be back here one day.” Ben didn’t know how or when this promise would come into its own, but he knew he had to keep an open heart.

So when an opportunity arose to fund a clinic in Vietnam, Ben and Willie decided it would be a great way to do something special for their 25th wedding anniversary, giving to it themselves and rallying his local Rotary Club to commit even more funds and expand the original plans for the clinic. When he and Willie visited the building site, they met a woman who connected them with David Collins, then president of Food for the Hungry (FH) Canada. 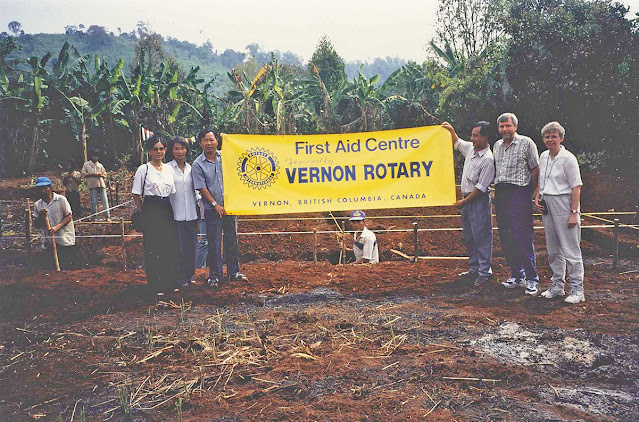 Ben and his wife, Willie, took a trip on behalf of their business, family, and the local Rotary club to Vietnam in 1995—one of Ben's first international trips that wet his appetite for development work. There they saw the foundation being constructed for a new medical centre, and later returned in 1996 as it was about to open.
David took Ben on another life-changing vision trip—back to Laos and Cambodia! “That trip really turned my life upside down,” Ben recalls. Like many supporters, witnessing the work in action helped him understand in deeper ways than reading reports ever could. He was intrigued to see how different FH’s approach was to other NGOs. “It was always more about teaching worldview than it was about money. And engaging the local Christian community. It seemed to me that FH’s was a more sustainable solution. You could leave, but your teaching will never leave—that will change minds and hearts.”

From that experience, Ben’s relationship with FH developed. He committed his business to fund an aqueduct to run water to a remote farming community in Laos. Another life-changing trip followed and Ben became a hardcore FH advocate, taking other business donors like himself on trips to see the work they funded and meet the people whose lives they impacted.

Because Ben had built a strong business and personally invested himself into training capable, quality managers, he was able to leave the company in their hands for extended periods of time to travel. So from 1996 - 2001, he regularly led FH teams to Asia. Through much prayer and many conversations with Willie, Ben realized it was time for a “change of address”. Like every good entrepreneur, his heart was open to the next thing to which God was calling him. He still relied on the same principles and skills he developed while leading at Reliance Tractor. After 25 faith-building years, he sold his thriving business. While shifting from owning and operating a farming equipment dealership to non-profit work may seem like a big jump from the outside, for Ben, it was just the next step in the ministry he was already doing.

For nearly three decades, Ben had not only used his business for mission - financially supporting Christian missionaries, World Renew, and FH projects - he had also understood his business as mission.

While it wasn’t a large company—12 employees or so—it had a deep impact, both locally and globally. Through honest work and quality goods, they supported farmers throughout the Okanagan, helping to provide livelihoods and food to countless Canadians. Ben explains how, through the ins and outs of daily work together, he was able to transform the lives of his employees through his business.

“We had [people living with alcoholism] that stopped drinking and gave their life to Christ. We had people that were going through a divorce that we were able to minister to. We had one particular fellow that we prayed for for 23 or 24 years that he would give his life to Christ and the year that we sold our business he went to an Alpha course and gave his life to Christ.”

So when it was time to shift from “business as mission” to “non-profit as mission”, Ben was ready. “I don’t think my MO [modus operandi] ever really changed too much,” he muses. It was simply a change of address God asked him to make.

To learn more about how you can make an impact as an FH business partner, contact Kevin McKay at or kevin.mckay@fhcanada.org or visit fhcanada.org/partner